The Great Seal of The State of Ohio

The Great Seal of The State of Ohio was provided by the Constitution in 1803. A rising sun with thirteen (13) rays symbolize the original thirteen (13) colonies. In addition, the sun rising over the mountains denotes Ohio as the first state west of the Alleghenies. A sheaf of wheat stands in the foreground as a symbol of agriculture and bounty. Standing next to the wheat is a bundle of seventeen (17) arrows representing Ohio’s Native Americans and also symbolizing Ohio as the 17th state to enter the Union.

rather than a “flag” or “banner.” All other state flags have a square or rectangular shape. All State Flags

The Ohio flag was designed by John Eisemann and officially adopted in 1902. The blue triangular field represents Ohio’s hills and valleys. It contains seventeen white stars – thirteen stars surrounding the circle are symbols of the original thirteen colonies. Four stars at the apex of the triangle raise the total number of stars to seventeen (Ohio was the 17th state to enter the Union in 1803).

How Ohio’s 88 counties got their names

The State of Ohio is made up of 88 counties, and each county has its own unique story as to how it was created and named. Many counties were named after presidents, Native Americans, key American Revolution figures and regions in other countries.

50 fun facts and trivia about Ohio 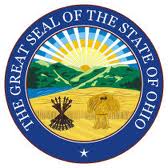