Judge Duhart received a B.A. in political science from Wright State University and his J.D. from The University of Toledo College of Law. He also received an L.L.M. in judicial studies from Duke University School of Law and has attended the Harvard Kennedy School of Government.

Judge Myron C. Duhart was elected to the Sixth District Court of Appeals in November 2020 and his current term expires on February 9, 2027. Prior to the Court of Appeals, he served as a trial judge in the Lucas County Common Pleas Court, General Division since 2011 and served as a commercial docket judge.

Prior to judicial service, Judge Duhart clerked for the Honorable Robert W. Penn and was in private practice in the areas of business litigation, personal injury and criminal law where he was part of a select cadre of attorneys certified by the Supreme Court of Ohio to handle death penalty cases. Judge Duhart is an adjunct professor at the University of Toledo College of Law where he teaches trial practice to third year law students. He also is an Army veteran and served as a JAG Officer in the United States Army. 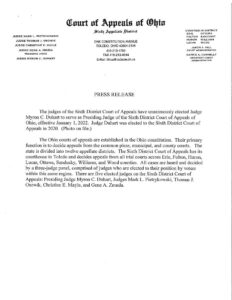 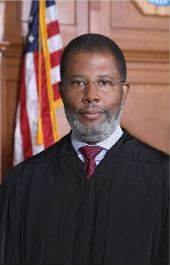