The Ohio Ballot Board prescribes and certifies the ballot language for proposed Constitutional amendments, initiatives, and referenda and oversees efforts to inform voters of proposed ballot issues. The Secretary of State chairs the five member board and the office of the Secretary of State provides professional, technical, and clerical support for the Board.

Several requirements and procedures must be met before a proposed statewide issue can be placed on the ballot. The requirements and procedures can be found here. The Ohio Ballot Board’s role in the process is first to determine whether the petition language contains a single issue and secondly, to prescribe the official ballot language and any missing arguments for each statewide issue.

Term ending dates listed above reflect the end of the four-year Ballot Board term as prescribed by Ohio Revised Code §3505.061(B)(1)(opens in a new window).  However, please note that the term of a Ballot Board member who is also a member of the Ohio General Assembly is the earlier of the following dates:  (a) The ending date of the ballot board term for which the member was appointed; or (b) The ending date of the member’s term as a member of the general assembly.  Ohio Revised Code §3505.061(B)(2)(opens in a new window). 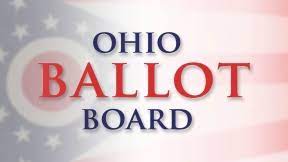