A lifelong Ohioan, Senator Sherrod Brown has spent his career fighting for the Dignity of Work – the idea that hard work should pay off for everyone, no matter who you are, where you live, or what kind of work you do. He has held nearly 500 roundtables across Ohio, because he believes the best ideas don’t come out of Washington – they come from conversations with Ohioans across our state.

Building on his successful work to make the Earned Income Tax Credit permanent, Senator Brown has a plan to overhaul our tax code to put people first, and to 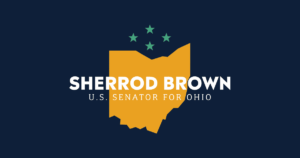 make hard work pay off for more Americans. That includes putting more money back in the pockets of workers and families, giving workers more power in the workplace, making it easier to save for retirement, and encouraging companies to invest in their greatest asset: the American worker. Senator Brown also believes we need to broaden our definition of work – caring for children or an aging parent is work, and so is getting an education. You can read more about Senator Brown’s plan to make hard work pay off here.

Sherrod has fought for Ohio jobs and Ohio companies, he’s fought against trade and tax policies that sell out workers, and he has taken on Wall Street greed. Sherrod pushed this country to save the American auto industry in 2009, and is fighting for Ohio’s auto supply chain with legislation to get rid of tax incentives for auto companies to ship jobs overseas.

He serves as Chairman of the Senate Banking, Housing and Urban Affairs Committee, where he played an instrumental role in passing the historic Wall Street reform law that established new consumer protections, created the Consumer Financial Protection Bureau, and reined in big banks. He’s fighting to end the corporate business model that puts short-term profits ahead of long-term investment in workers and communities, and to make it easier for everyone to find and afford a home.

One of Sherrod’s first votes in Congress was against the original NAFTA, and he has led the bipartisan fight for a trade policy that puts American workers and American businesses first. He led opposition to the Central American Free Trade Agreement, and he was a leader in the fight that helped kill the Trans-Pacific Partnership. In 2015, President Obama signed Senator Brown’s bipartisan Leveling the Playfield Act, the most significant improvement to our trade enforcement laws in more than a decade that led directly to key wins for the Ohio steel industry – including wins in cases filed by companies with plants in Ohio, like Nucor, U.S. Steel, ArcelorMittal, and AK Steel, which employ more than 8,200 Ohioans. In 2020, he voted for a trade deal for the first time in his career, after working to improve President Trump’s first draft of a new NAFTA – he secured groundbreaking worker protections, including his Brown-Wyden provision that amounts to the strongest labor enforcement in American history in a U.S. trade deal.

Sherrod believes that quality, affordable health care is a right for all Americans, and he refused for years to accept Congressional health insurance until Congress passed the Affordable Care Act, which ensures Ohioans will never be denied care because of a preexisting condition. The senator now gets his health insurance through the same exchange system available to all Americans. Senator Brown has a plan to bring down the cost of prescription drugs that one news organization said, “combines every idea drug lobbyists hate.” He is also working to tackle the addiction crisis. The president signed Sherrod’s bipartisan legislation to give Customs and Border Protections agents high-tech tools to screen for illegal opioids at the border, and he is working with Senator Portman to get Ohio law enforcement the same tools. Senator Brown also fought to protect Ohio’s Medicaid expansion – our state’s number one tool to get people into treatment.

Inspired by his faith, Sherrod is committed to social and economic justice. He joined Civil Rights legend Congressman John Lewis as co-chair of the Congressional delegation to commemorate the 50th anniversary of the march for voting rights in Selma in 2015, and made the pilgrimage to Selma for the fifth time in 2019. Sherrod is fighting back against politicians and judges who erect more and more barriers to voting. As a former Ohio Secretary of State, Sherrod has long championed voting rights, and the Washington Post called his voter registration efforts, “probably the most intensive and wide-ranging in the nation.”

Sherrod is fighting to ensure that all Ohio children, no matter their zip code or the color of their skin, have the opportunity to succeed. He has joined with officials and community partners to launch My Brother’s Keeper mentorship programs for boys and young men of color in cities across Ohio. For more than a decade now, Sherrod has also convened a one-of-its-kind Ohio College Presidents Conference in Washington to discuss ways to leverage federal resources to promote higher education and job training in Ohio.

Ohio is one the of the few states to have both its senators sit on the powerful Senate Finance Committee, where one of Senator Brown’s top priorities is protecting the retirement security Ohioans have earned over a lifetime of hard work. In 2017, Senator Brown helped secure permanent health care security for Ohio coalminers, and he continues to lead the fight for a bipartisan solution to the multiemployer pension crisis threatening millions of retirees, workers, and small businesses.

As the only Ohio senator in half a century to serve on the Senate Agriculture, Nutrition, and Forestry Committee, Sherrod helped write the most recent Farm Bill that strengthened the farm safety net, improved conservation programs for our Lake Erie, and worked to combat childhood hunger. He helped secure Central State University’s recognition as an 1890 Land Grant University – a designation for HBCU land grant universities that allows them to access particular funding – and authored and fought to secure investments ensuring the 1890s can expand their research capacity and outreach in the coming years.

Sherrod is the longest-serving Ohioan on the Senate Veterans Affairs Committee, where he works to expand educational opportunities for veterans, servicemembers, and their families. As co-chair of the Senate Air Force Caucus, Senator Brown brought a congressional delegation of his colleagues to Wright Patterson Air Force Base in Dayton, and has secured important funding for base operations.

Sherrod was born and raised in Mansfield, Ohio, where he earned his Eagle Scout award and spent summers working on his family’s farm. He is married to author and Pulitzer Prize-winning columnist Connie Schultz, and he is the author of three books: Congress from the Inside: Observations from the Majority and the Minority, Myths of Free Trade: Why American Trade Policy Has Failed, and Desk 88: Eight Progressive Senators Who Changed America. They live in Cleveland, Ohio, with their rescue dogs, Franklin and Walter, drive Jeeps made by union workers in Toledo, and have three daughters, a son, a daughter-in-law, three sons-in-law, and eight grandchildren. 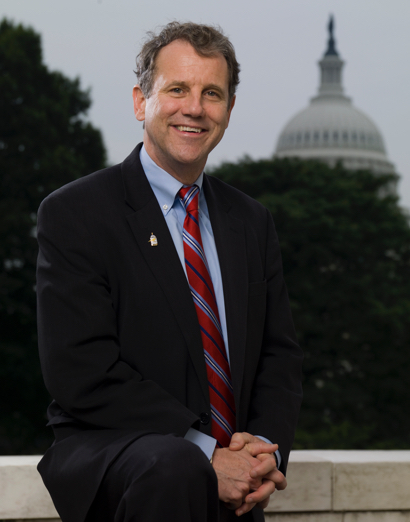