“EQUAL JUSTICE UNDER LAW” – These words, written above the main entrance to the Supreme Court Building, express the ultimate responsibility of the Supreme Court of the United States. The Court is the highest tribunal in the Nation for all cases and controversies arising under the Constitution or the laws of the United States. As the final arbiter of the law, the Court is charged with ensuring the American people the promise of equal justice under law and, thereby, also functions as guardian and interpreter of the Constitution.

The Court and Its Traditions

For all of the changes in its history, the Supreme Court has retained so many traditions that it is in many respects the same institution that first met in 1790, prompting one legal historian to call it, “the first Court still sitting.”

Justices have perpetuated the tradition of longevity of tenure. Recently, Justice John Paul Stevens served for 34 years before retiring in 2010 as the fourth longest serving Justice in the Court’s history, just barely missing the third longest record of service held by Justice Hugo Black, who served for 34 years and one month prior to his retirement in 1971. The record for length of service is held by Justice William O. Douglas, who retired on November 12, 1975, after serving a total of 36 years and six months. He surpassed the previously held record of Justice Stephen J. Field, who served for 34 years and six months from 1863 to 1897.

As is customary in American courts, the nine Justices are seated by seniority on the Bench. The Chief Justice occupies the center chair; the senior Associate Justice sits to his right, the second senior to his left, and so on, alternating right and left by seniority.

Since at least 1800, it has been traditional for Justices to wear black robes while in Court. Chief Justice Jay, and apparently his colleagues, lent a colorful air to the earlier sessions by wearing robes with a red facing, somewhat like those worn by early colonial and English judges. The Jay robe of black and salmon is now in the possession of the Smithsonian Institution.

Initially, all attorneys wore formal “morning clothes” when appearing before the Court. Senator George Wharton Pepper of Pennsylvania often told friends of the incident he provoked when, as a young lawyer in the 1890s, he arrived to argue a case in “street clothes.” Justice Horace Gray was overheard whispering to a colleague, “Who is that beast who dares to come in here with a grey coat?” The young attorney was refused admission until he borrowed a “morning coat.” Today, the tradition of formal dress is followed only by Department of Justice and other government lawyers, who serve as advocates for the United States Government.

Quill pens have remained part of the Courtroom scene. White quills are placed on counsel tables each day that the Court sits, as was done at the earliest sessions of the Court. The “Judicial Handshake” has been a tradition since the days of Chief Justice Melville W. Fuller in the late 19th century. When the Justices assemble to go on the Bench each day and at the beginning of the private Conferences at which they discuss decisions, each Justice shakes hands with each of the other eight. Chief Justice Fuller instituted the practice as a reminder that differences of opinion on the Court did not preclude overall harmony of purpose.

For more information on the Supreme Court of the United States,
please visit here. 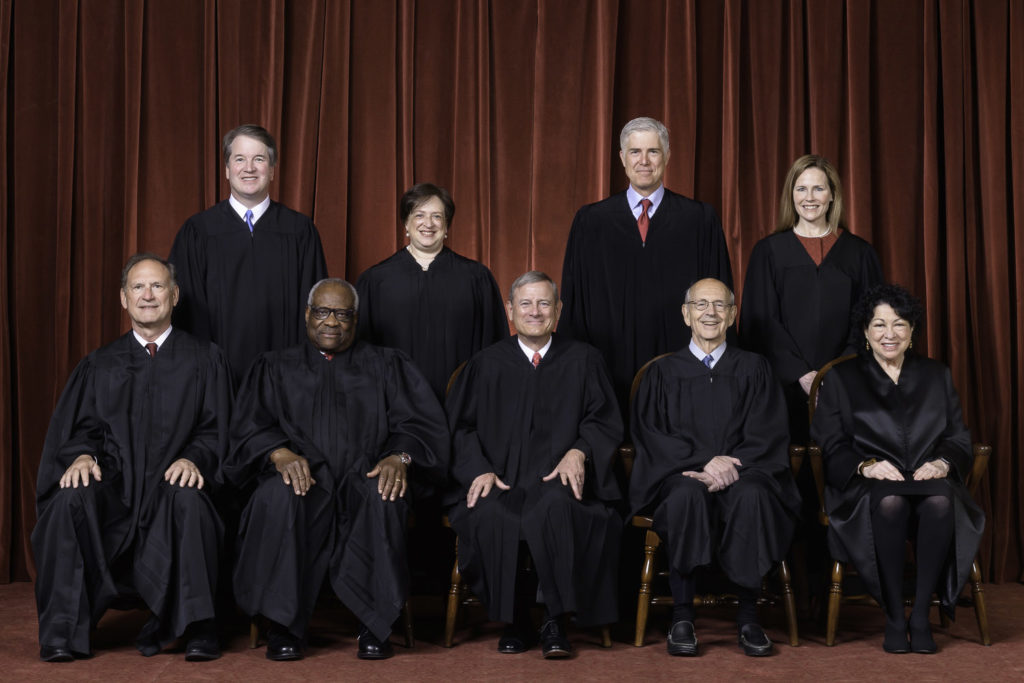