Lawsuits Have Been Filed
Due To Continued GOP Gerrymandering

“These Ohio maps are a failure in almost every way,” said Holder, who served as U.S. attorney general under former President Barack Obama. “They fail to reflect the will of Ohio voters and, ultimately, fail to meet the requirements of the state constitution.”

The move comes one day after the American Civil Liberties Union of Ohio and several voting rights groups filed a lawsuit in the Ohio Supreme Court, the court tasked with reviewing maps.

On September 23, 2021, the ACLU of Ohio, League of Women Voters-Ohio, A. Philip Randolph Institute and several 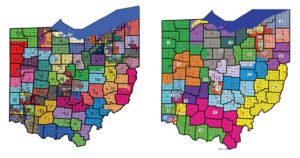 Ohioans filed a legal challenge over the Ohio Republican gerrymandered state districts. The Ohio Redistricting Commission approved the maps last week in a five Republican to two Democratic party-line vote, ignoring the constitutional reforms passed overwhelmingly by Ohio voters TWICE in 2015 and 2018 by more than 70% of the voters. The maps lock in Republican veto-proof supermajorities in both chambers of the Ohio General Assembly – possibly for the next ten years.

Who Are The Groups Involved in Redistricting?

Several groups are involved with the redistricting project –
from providing data to hosting educational programs so we can be informed citizens.
Visit each group’s website for the latest information, webinars or other events.

Census2020
The Census2020 provides the data of
apportionment results to all states for
their use to redraw Congressional and
state districts beginning in 2021.

The “Historical Apportionment Data Map” currently
displays apportionment results for each census
from 1910 to 2010.

The 2020 Census apportionment results
will be added to the map as they become available.
The Census Bureau plans to release
apportionment counts by April 30.
Dates have been delayed – see information below.

The Fair Districts = Fair Elections Coalition
is committed to reining in partisan gerrymandering.
We seek fair state legislative and
congressional maps that keep communities
together because we believe that
all elections should be fair and meaningful.

Common Cause Ohio
has been a leading voice for
government accountability for five decades.

The Ohio Redistricting Commission is comprised of seven members:

The Ohio Citizens Redistricting Commission (OCRC)
is an independent, non-artisan commission made up of
15 volunteer members. Commission members will include
academics, political party officials, community representatives,
and others from across the state.
The commission’s activities include:
hosting public hearings for community input,
collecting publicly available data for mapmaking,
and supporting public education on redistricting.

Commission members are selected through an application or referral process. There is no requirement for existing familiarity with redistricting. We desire a wide range of background knowledge on the topic. Additional members may be appointed to the current commission.

For events scheduled to keep Ohioans informed
about the redistricting process,
please visit one of the above websites.

Ohio can’t draw new congressional map until 2022 after the U.S. Supreme Court ruled federal courts shouldn’t play a role in fixing partisan gerrymandering. Gerrymandering will now be in the hands of Ohio’s legislators through 2021. If an agreement cannot be reached, then the Ohio Redistricting Commission will play a role. And if all fails, the fate of redistricting will ultimately be in the hands of the Ohio Supreme Court. Right now, the Ohio Supreme Court is made of four Republicans and three Democrats.

April 1, 2021 – DELAYED
Rescheduled to September 30, 2021
Census Bureau will send redistricting counts
to each state. These counts will be used  to redraw
state legislative districts based on population changes.
In Ohio, state legislature is required to propose a
new district map, conduct public hearings and vote.
If the is bipartisan – supported by at least half of the
members in each party – new districts go into effect
for a 10-year period beginning in 2022.

For Congressional district lines, an impasse would result in the commission attempting to adopt a bipartisan plan by October 31st. If the commission can’t adopt a plan, the General Assembly gets a shot at it, with a deadline of November 30th.

Mapmaking in 2021:
Community Mapping and Mapmaking
with DistrictR Tutorial
WATCH: YouTube
Here is an opportunity to learn about
community mapping and also a tutorial on District R,
public software developed by MGGG Redistricting Lab,
a research group at Tufts University.
Common Cause Ohio will lead the discussion about
the benefits of community mapping and
then provide a demonstration of the software.