We will be posting important information about legislation that you should be aware of and you may want to contact your legislators about. We will provide you with actions to take by calling or e-mailing your State Legislators or Congressmembers – along with Best Practices and scripts. You must let them hear your opinion on issues important to you! This is easy to do! Let’s get started!

You can send e-mails or make phone calls at any time – day or night! You can leave a message on their office answering machine when you call. Staff members will document your opinions and let your legislator know your point of view.

Even if Senator Brown and Congresswoman Kaptur have already signed onto a bill, please contact them to THANK them for supporting bills you also support! They always appreciate hearing from constituents!

Voting Rights are being threatened in many states across the nation. More than 360 bills with restrictive provisions have been introduced in 47 states. We must continue to combat this. Tell our Senators that they must support S-1, the For the People Act and S-4 John Lewis Voting Rights Advancement Act. The House passed the bill – HB1 – on March 8, 2019, by a party-line vote of 234–193. The Senate held a procedural vote to hold a floor debate on June 22, 2021, with all Republicans voting no to debate and all Democrats voting yes to debate – a 50-50 vote along party lines. Thus, SB1 has yet to be voted on and is currently stalled in the Senate. Senators Amy Klobuchar (D-MN) and Joe Manchin (D-WV) have been working on a pared-down version of the For The People Act.

The Filibuster in the past required senators to stand and talk for hours to block voting on legislation. Currently, a senator’s staff member can simply send an email for the senator and can hold up legislation just stating in the email that the senator invoked cloture, which is the phrase to say that this is the process by which the senate will need 60 votes – or 2/3 of the senate – to basically use the filibuster. It is no longer a talking filibuster. At this point, it is basically ‘pressing a button’ where the other side needs 60 votes to pass any legislation. If President Biden and congressional Democrats want to pass their sweeping agenda, they are going to have to change the Senate’s filibuster rules.  It is time for the filibuster to be reformed.

Speaker Pelosi has convened a January 6 select committee to investigate the insurrection attack against the U.S. Capitol. After Minority Leader Kevin McCarthy pulled all of his appointees from the commission, Speaker Pelosi appointed all nine members to the commission – including the republicans.

SB16: This is an anti-protest bill. It would allow organizers and/or organizations to be charged with second-degree felonies if an event they organize is deemed to be a ‘riot’ – there is no definition of what a ‘riot’ would be considered. It would criminalize four or more people blocking a street, sidewalk or other public passage, making such action a fifth-degree felony. The bill also criminalizes providing ‘material support’ including providing bottles of water, food and donations to organizations who organize a protest that turns destructive.

SB51: Would raise Ohio’s minimum wage to $15.00/hour. The minimum wage would be raised incrementally by $1.00 per year 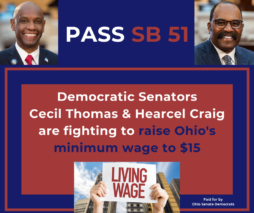 beginning January 1, 2022, every January 1 thereafter and by January 1, 2025 would be $15.00/hour. Every September after 2025, the wage rate will be adjusted. Specific workers who receive tips may be excluded. Please call your State Senator and State Senator Terry Johnson (614-466-8082) to ask him to pass SB 51 through committee.

SB87: To create an Asian American and Pacific Islander Commission. Please contact your State Senator and call Senator Kristina Roegner (614-466-4823) to ask her to give SB87 a hearing in her committee.

HB89: Current law states that a person carrying a gun in their car must promptly notify a Law Enforcement Officer that s/he is doing so if s/he is stopped. HB89 eliminates the word “promptly.”
Law enforcement is against this. They believe it puts both the officer and the driver at risk. Officers want to know – and should know – if someone is carrying a gun, so that they can make appropriate decisions in a timely manner.
Please contact State Representative DJ Swearingen (R) (contact info above) and State Representative Scott Wiggam (R), Chair/House State and Local Government Committee (contact info below):
Message:

HB149/SB80: Labeling party on Ohio Supreme Court and Appellate Judicial Candidates on ballot; passed the Senate on 4.21.2021; passed the House on 6.23.2021. Signed into law by Governor DeWine. Current law provides exceptions to all Ohio judicial candidates having party affiliation next to name on General Election ballot. SB80/HB149 mandates that only Ohio Supreme Court and Court of Appeals judicial candidates have party affiliation next to name on General Election ballot. The Ohio Judicial Conference and the Ohio State Bar Association for Legal Professionals are against both bills. Current Ohio Supreme Court Chief Justice Maureen O’Connor has pushed to remove party labels from primary judicial races. Main House sponsor of HB149 is DJ Swearingen-R.

HB 294: Enact Election Security and Modernization Act. This is voter restriction legislation. The GOP has mixed in a little good language to get all the bad language passed.

Good language includes: Automatic voter registration and online absentee ballot requests would be permitted which LaRose campaigned he would setup immediately, but hasn’t done anything to move this forward.

HB380: Enact the Election Engagement Restoration Act: Introduced by Representative Bride Rose Sweeney (D), this bill will repeal the bans on public-private partnerships for voter registration drives; repeal provisions of law regarding court settlements that conflict with the Ohio Revised Code (O.R.C.) and private entities’ involvement in election-related activities. On 9.16.2021, this bill was assigned to committee for hearings.

HB387: ‘Election Integrity’. Introduced and co-sponsored by GOP, HB387 would turn the clock back on nearly everything that has been done over the past 16 years to make it easier to vote in Ohio.

HB400: Prohibits school boards from requiring students to wear masks in school or on buses. From late July to late August, Ohio saw a 351% rise in COVID cases in children. Increasing numbers of children are now being hospitalized, placed in ICUs and put on ventilators.